They are all just attempts to view a story through a new lens – this is how we process culture.

Should this dude have just written his own original story? Maybe. But we do seem to love a new take something old. It’s no secret that humans crave novelty, but there also a strong need for a thread of the familiar to clue us in on how to interpret what we are seeing. Consider how much people enjoy remakes. And remixes. And makeovers. And cross-overs. It’s like, “Ok, I am really familiar with this character, but what if they were in this situation or what if they met this person? Or what if we took this story and made it darker and edgier.”

I would guess it has to do with the underlying mechanisms we use to model new situations based on previous experiences (such as dreaming or fantasizing). Or the way in which we work backwards to try to figure out something that has already happened – by speculating on what may have happened and comparing against evidence/experience currently available to us. We are essentially checking to see how tightly or loosely it “maps” to what we already know or expect.

I wonder if something about the novelty to familiarity ratio determines how “good” something is perceived to be. Or how well it maps back to what you compare it to. That has got to be something that would be entirely based on the individual. Possibly on how willing they would be to re-evaluate a concept they are using as the basis for understanding novel concepts.

Also, if I too readily abandon my beliefs in favor of novel information, I become sort of naive or not very trusting in my own understanding. I might be more willing to try to acknowledge every single idea as valuable and believe you should never tell anyone they are wrong. My head would be a constant swirl of re-evaluation, and I might never get anything done because WHO EVEN KNOWS WHAT IS WORTH DOING?

Is this basically the difference between conservatives and liberals?

Thanks for this, internet.

And just so I have these both in the same place –

This video puts me in the mind of a glorious future where everyone is an intellectual, even the thugs.

And this is just pure beauty.

I dig the kinetic typography too, and this one is really well done. Although, I think my favorite is still the one somebody did as an art project for the chemical burn scene from Fight Club.

That video in particular struck me because it manages to convey the intensity of that scene in full measure using sound and arrangement of text.

And just because, here is one from The Big Lebowski

Really, you should just stop whatever you’re doing and spend the rest of the day watching videos on youtube.

I’ve been signing this to myself for the past couple of days.

I’m pretty sure one of these dudes is stalking Katie Couric. I picture him in a little studio in his basement, obsessively recording and editing the evening news to make Katie talk to him. Possibly he just has an in at CBS that sends him copies. Along with a baggie full of hair from her brush.

I remember that this came out when I was in junior high, which makes me feel mildly old. But fuck you guys – Tammy Wynette is old and she gets to be queen of the Africans. She is also attended by blond Asians, which is awesome.

Actually, Tammy Wynette is dead, so I win. Possibly so do the rhino-people. I got a malevolent vibe from them, but they seemed content with rather modestly rocking out at the base of the dais, then slipping away in their submarine.

It’s the name of the band. Nobody is wearing black nail polish, I promise.

**EDIT**
This has nothing at all to do with the video, but I feel it bears mentioning. I read this last night 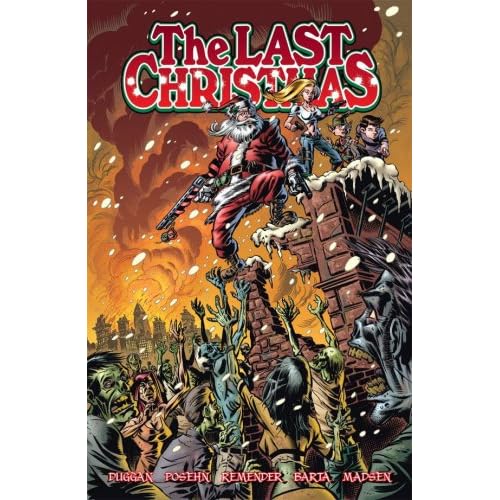 If you have any interest in seeing Santa try to drink himself into a coma in the midst of a zombie apocalypse, then I’d highly recommend it.

I went to the LCD Soundsystem/Arcade Fire concert last Friday – LCD Soundsystem was amazing, which was good since that was my primary interest in going. I honestly didn’t give much thought to the fact that Arcade Fire was there too, even though that was technically the concert for which I purchased a ticket. They are really fun to see live though, and they do make appearances in my music rotation. There are ten people in the band and among the instruments I counted onstage were an accordian, a tuba, a french horn, a cello and some sort of instrument which required cranking.

I would like to take this opportunity to assert that there is no place to avoid paying a convenience fee when purchasing concert tickets. You pay it online, you pay it at ticketmaster sites, you pay it at the gate. Well, I lied – I went to see Rush last month with my brother Jack and I bought my ticket from a dude in the parking lot. He did not charge me a fee of any sort.

In other news, the folks at Lifestyle Family Fitness are a bunch of fucks. I cancelled my membership with Lifestyle several months ago after I joined Lifetime fitness center. Since there is no possible way any subscription/membership service can cancel a membership over the phone, I went into one of the clubs to cancel in person. When I went in and made an inquiry about cancelling, I had to deal with the employees trying to discourage me from giving up on my health until I just told them, “Sorry, I just joined a nicer gym. No hard feelings, ok?”

After I cancelled, I noticed charges were still coming through on my credit card. I called Lifestyle, bitched about it & was told my membership was still active. I said I want it cancelled. They said I’d have to come in to cancel. I said no, I’ve already done that. She reiterated that I showed as active and I could cancel by either coming to the club or writing a letter to their corporate office. So – I hung up and requested that my credit card company remove the charges from my card, which they did. So that goes on for about four months – Lifestyle charges, Discover reverses. I finally just requested a new account number, which happily resulted in no more gym charges.

Last week, I get a call from these shit weasels saying that they have been unable to charge my credit card for my membership fees, and would I like to update my account information with a valid card number. No, as it turns out, I would not since I cancelled my membership six months ago and have been trying to extract myself from any sort of association with you people ever since. She informs me that if I’d like to cancel my membership, I’ll need to write a letter to corporate or go into the club to cancel in person. Also, my account has gone to collections for the last two months of membership dues.

She mentioned that if I still had my printout from my cancellation attempt I could bring that in, so now I’m digging through various stacks of paper trying to find it. Though for anyone that knows me and my organizational habits the notion that I’ll be able to find a sheet of paper that I acquired six months ago is laughable.